Sarah Shook and the Disarmers new album, “Years” is set for release this Friday…

Sarah Shook wasn’t born in North Carolina but after moving to the state at 19 years old has spent the majority of her adult life here. The lead singer has been on a musical journey since beginning her first band in 2010, Sarah Shook and the Devil.

The group put out their first record, “Sidelong”, in October of 2015 and after signing with Bloodshot Records, the re-release early last year put Shook and her band into the spotlight for new country and Americana artists to watch.

Over the past year, Shook has been touring all over with recent stops at South by Southwest in Austin and in the southeast with Nikki Lane. She returns to North Carolina this Friday for an album release show at Cat’s Cradle in Carrboro. 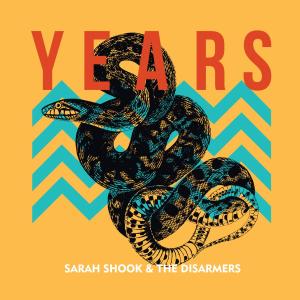 “Years,” the bands’ second album, has been described as a “record about finding a way. A way through exhaustion, frustration, betrayal, hangover after hangover, upper after downer after upper, fight after never-ending fight. It’s about picking yourself and dusting yourself off after years of being trampled and beaten down, jutting your chin out, head high, after they’ve done their worst, and saying ‘Still here.’” by Shook herself.

The Disarmers also benefited from another North Carolina band dissolution as former American Aquarium drummer Kevin McClain recently came on board. McClain is no stranger to touring, traveling with his former group for many years and fits perfectly into Shook’s band with his own unique style on the drum kit.

Following the album release party on Friday night, Shook and the Disarmers will visit Neighborhood Theater in Charlotte as they begin a 14 state tour through the end of May, before boarding a plane to Sweden.

Once there, the band will play multiple shows across the country and into Norway before a grand finale at the Stockholm Americana Festival on Saturday, June 16.

Years in the making, “Years” should only serve to further the rise of Sarah Shook and the Disarmers into the future.

1 thought on “Sarah Shook and the Disarmers: Years in the Making”