A recent six song EP release from Corey Hunt Band called “North of Low Water” has the frontman and his right hand band member, Eric Wise, touring here, in Texas and across the southeast all spring. After opening for Eli Young Band in Greensboro, hosting a show in his hometown of Asheboro and kicking off a tour of Texas last weekend with events in Dallas, Houston and San Angelo, the resident North Carolinian returned home for a midweek gig before hitting the road … again.

The official spring tour features nine performances across the Carolinas, 10 Texas dates and other shows in both Georgia and Alabama through the end of April. Criss-crossing the southeast over the past seven years, the Corey Hunt Band continues to build a loyal fan base who appreciates original song writing and pure musical talent.

On Wednesday night the crowd wasn’t on hand for covers of conveniently packaged radio material but instead present to hear only what Corey Hunt was all about. He impressed with lyrics relaying the every day dealings of life, hardships, heartache and happiness with Wise keeping pace alongside. 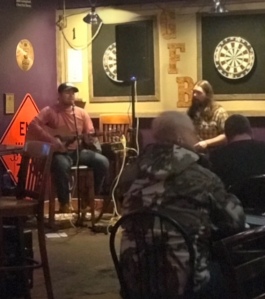 ‘Uwharrie River,’ a song off the new EP was a crowd favorite in addition to a song Hunt said he wrote that day behind a rhythmic tune and chorus, ‘Dancing Down the Hall.’ Back in North Carolina for just a few days, Hunt and Wise left their touring van in Texas but will fly back for two more dates this weekend in Fort Worth and San Antonio.

Hunt introduced himself to the crowd with a few poignant words between the second and third songs of his set. A simple name and band introduction followed by breaking the news that if you had previously listened then recognizing his songs would be easy, but if not, then hopefully you’d learn as the night transpired.

As stated, there were no covers and no one cared. His ability to entertain without relying on work by other musicians or stereotypical “crowd pleasers” only further demonstrates the lengths to which Hunt has honed his craft by playing whenever and wherever possible.

It continues to pay off as ‘Hannah Belle’ broke into the Top-50 on Texas regional radio at one point and a few songs from “North of Low Water” have potential to do the same. The relentless touring, interviewing and a sincere appreciation for his fans should keep the Corey Hunt Band momentum building and moving forward throughout the year.

For those who appreciate and are fans of original music – a staple in the Red Dirt, Texas and Americana music scenes – the time is now to broaden your horizons by realizing there is some great music coming from North Carolina originals.

Corey Hunt Band is one of those who has been paving the way for quite some time and will continue to do so well into the future.